The development of sustainable catalysts that use materials of high natural abundance and long-term stability is a major goal of this project. Our research is closely linked to the discovery of the catalytic CaMn4O5 site for photosynthetic water oxidation. Armed with nature's emerging blueprint for design of a water oxidation enzyme, we are synthesizing bioinspired inorganic complexes and materials for use in hybrid photoelectrochemical cells as water splitting catalysts. Our proposed mechanism for photosynthetic water oxidation serves as the guiding principle for catalyst design. 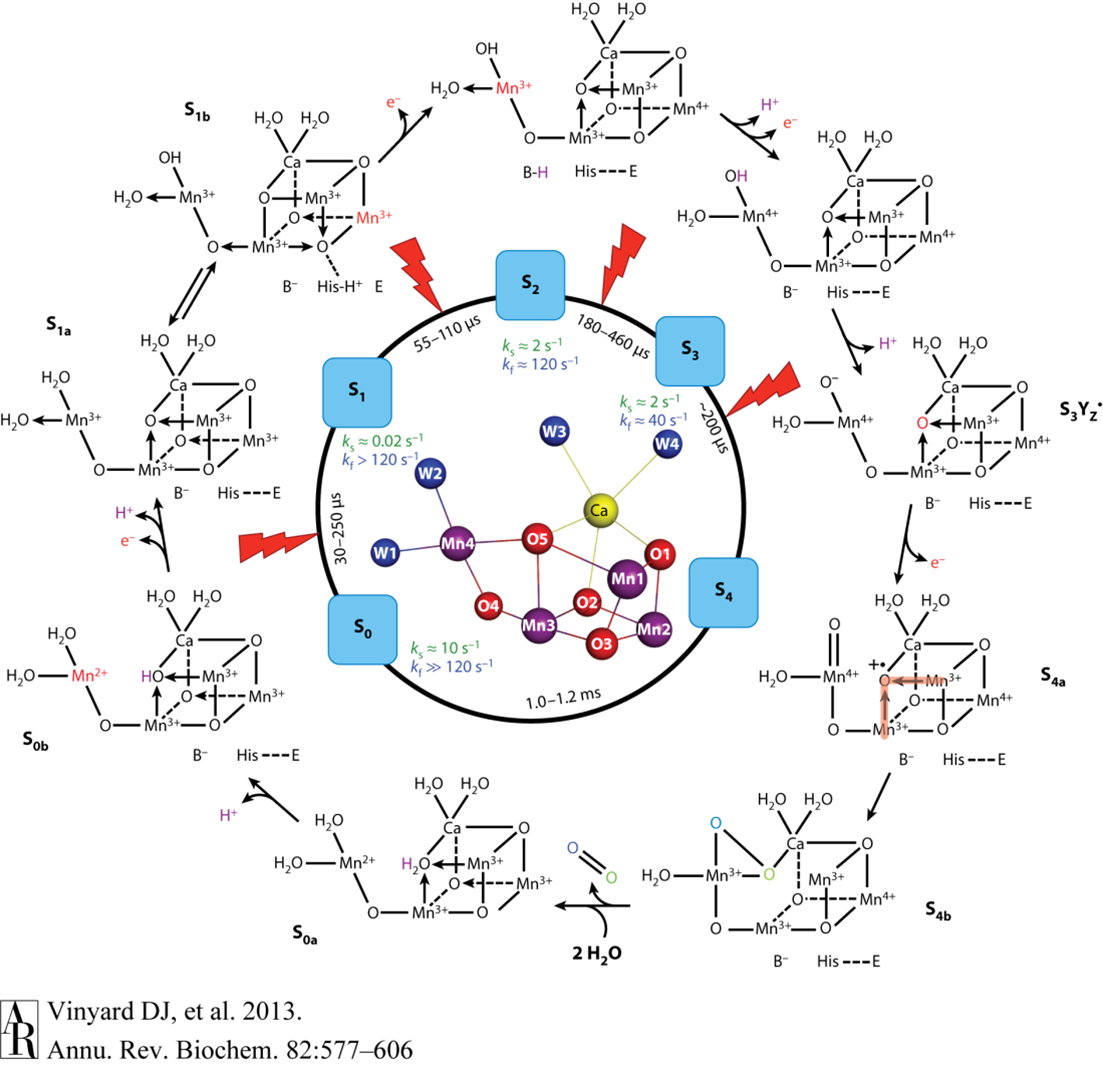 1. Development of the discrete Co4O44+ "cubane" and its catalytic activity.

The molecular Co4O4 cubane complex Co4O4(OAc)4(py)4 (1) catalyzes efficient water oxidizing activity when powered by a standard photochemical oxidation source or electrochemical oxidation. The pH dependence of catalysis, the turnover frequency, and in situ monitoring of catalytic species have revealed the intrinsic capabilities of this core type. The catalytic activity of complex 1 and analogous Mn4O4 cubane complexes is attributed to the cubical core topology, which is analogous to that of nature’s water oxidation catalyst, a cubical CaMn4O5 cluster. 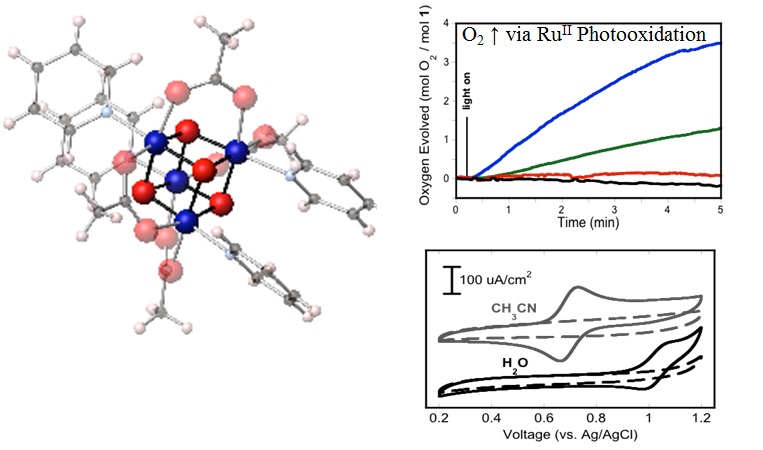 2. Mechanistic Studies on the Co4O4 Cubane.

The cobalt cubium Co4O4(OAc)4(py)4(ClO4) (1A+) containing the mixed valence [Co4O4]5+ core is shown by multiple spectroscopic methods to react with hydroxide (OH-) but not with water molecules to produce O2. The yield of reaction products is stoichiometric (>99.5%): 4 1A+ + 4 OH- → O2 + 2 H2O + 4 1A. By contrast, the structurally homologous cubium Co4O4(trans-OAc)2(bpy)4(ClO4)3, 1B(ClO4)3  produces no O2. EPR/NMR spectroscopies show clean conversion to cubane 1A during O2 evolution with no Co2+ or Co3O4 side products. Mass spectrometry of the reaction between isotopically labeled µ-16O(bridging-oxo) 1A+ and 18O-bicarbonate/water shows: 1) no exchange of 18O into the bridging oxos of 1A+, and 2) 36O2 is the major product, thus requiring two OH- in the reactive intermediate. DFT calculations of solvated intermediates suggest that addition of two OH- to 1A+ via OH- insertion into Co-OAc bonds is energetically favored, followed by outer-sphere oxidation to intermediate [1A(OH)2]0. The absence of O2 production by cubium 1B3+ indicates the reactive intermediate derived from 1A+ requires gem-1,1-dihydoxo stereochemistry to perform O-O bond formation. Outer-sphere oxidation of this intermediate by 2 eq. 1A+ accounts for the final stoichiometry. 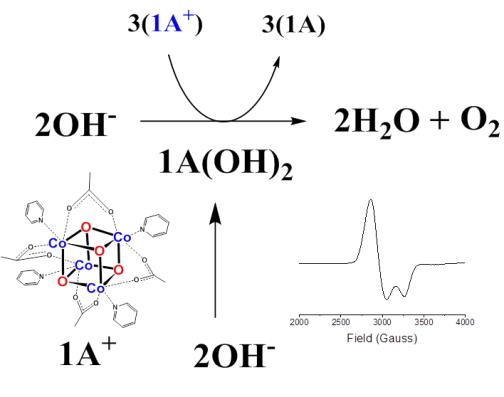 The metal-oxo M4O4 “cubane” topology is of special significance to the field of water oxidation as it represents the merging of bioinspired structural principles derived from natural photosynthesis with successful artificial catalysts known to date. We directly compared the rates of water oxidation/O2 evolution catalyzed by six cobalt–oxo clusters including the Co4O4 cubanes, Co4O4(OAc)4(py)4 and [Co4O4(OAc)2(bpy)4]2+, using the common Ru(bpy)32+/S2O82- photo-oxidant assay. At pH 8, the first-order rate constants for these cubanes differ by 2-fold, 0.030 and 0.015 s–1, respectively, reflecting the number of labile carboxylate sites that allow substrate water binding in a pre-equilibrium step before O2 release. Kinetic results reveal a deprotonation step occurs on this pathway and that two electrons are removed before O2 evolution occurs. The Co4O4 cubane core is shown to be the smallest catalytic unit for the intramolecular water oxidation pathway, as neither “incomplete cubane” trimers [Co3O(OH)3(OAc)2(bpy)3]2+ and [Co3O(OH)2(OAc)3(py)5]2+ nor “half cubane” dimers [Co2(OH)2(OAc)3(bpy)2]+ and [Co2(OH)2(OAc)3(py)4]+ were found capable of evolving O2, despite having the same ligand sets as their cubane counterparts. Electrochemical studies reveal that oxidation of both cubanes to formally Co4(3III,IV) (0.7 V vs Ag/AgCl) occurs readily, while neither dimers nor trimers are oxidized below 1.5 V, pointing to appreciably greater charge delocalization in the [Co4O4]5+ core. The origin of catalytic activity by Co4O4 cubanes illustrates three key features for water oxidation: (1) four one-electron redox metals, (2) efficient charge delocalization of the first oxidation step across the Co4O4 cluster, allowing for stabilization of higher oxidizing equivalents, and (3) terminal coordination site for substrate aquo/oxo formation.

The dependence of rate, entropy of activation, and (1H/2H) kinetic isotope effect for H-atom transfer from a series of p-substituted phenols to cubane Mn4O4L6 (L = O2PPh2) reveals the activation energy to form the transition state is proportional to the phenolic O–H bond dissociation energy. This chemistry models photosynthesis: electrostatic activation of the tyrosine oxidant is achieved by prevention of H+ release via strong H-bonding to nearby histidine, and by electrostatic polarization from coordinated Ca2+. These charges help create both the high oxidation potential of tyrosine and provide a positive electrical potential gradient to the Mn4O5 subcluster that facilitates forward electron transfer.