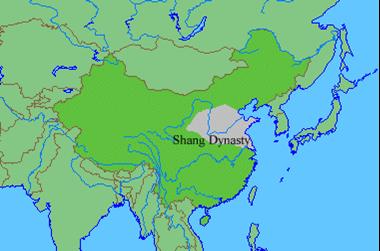 The Shang is the earliest Chinese dynasty for which we have written evidence. Shang civilization was a series of towns united under the Shang king.

The center of the Shang domain was found in the eastern and northeastern regions of Henan. The king's residence was in the center of the city. It was built on a north-south axis. All buildings in the city were rectangular and were made of mud with wooden beams. In addition to the king, the nobility lived within the city. They also lived in houses of mud.

The peasants often lived outside of the city, although there were a few within the walls of the city. Those within the city lived in pits and cellars. The common folk outside the city lived in villages. Not much is known about the villages except that they did exist. It is thought that they harvested millet, barley, and perhaps rice. They used tools made of wood to work the land. The peasants operated on a "well-field" system. The land was divided into nine squares. The peasant would keep the products of eight squares, while the lord would take the products of the ninth square. It is believed that these people were very primitive in comparison to the people of the city.

The cities around the capital were called palace-cities. Each city was surrounded by a wall. Within the walls were the military and religious centers as well as the nobility residences. Every palace-city was a copy of the capital city. The buildings were identical and arranged in the same format. The capital of the Shang moved seven times before finally settling in Yin which became the permanent capital.

The nobility spent much of their time hunting or in warfare. Game and captives were treated equally by nobility: they were sacrificed to the gods. Most warfare was directed against rebel cities or Barbarians. Warfare was more like a raid than anything else. Precious metals, food, and livestock, as well as people were taken from the place of warfare. The noble class was the core of the army. Other spots were filled in by slaves (captives).

The Shang held their royal ancestors in high regard. Bronze was found in royal tombs as well as the skeletons of about three hundred servants who were to accompany the king to the heavenly world. Funery tablets were kept in the front of temples and all rituals were carried out in their presence. These tablets were thought to contain the souls of the ancestors. Every royal event was announced aloud in the temples to inform the ancestors. In addition, the diviners often consulted the ancestors by offering sacrifices and reading the cracks of burnt bones.