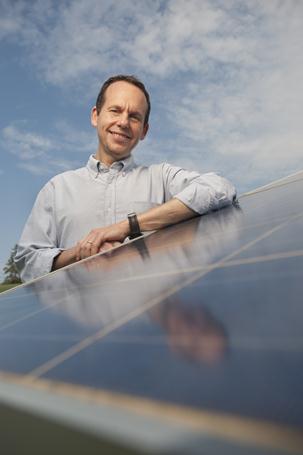 Goldman’s work is particularly important in addressing U.S. dependence on foreign fuels as well as the search for cleaner energy. Goldman has conducted extensive research during his 25-year career focused on the conversions of hydrocarbons – organic compounds found in fossil fuels – and other small molecules. Goldman has developed a process to use low value byproducts that may be obtained from coal, natural gas or plants, into a synthetic diesel fuel that is more environmentally friendly than traditional diesel fuel.

“We hope to one day eliminate our dependence on foreign fuels,” said Goldman. “The U.S. has 40-times more coal energy than oil, large reserves of natural gas, and many sources of biomass including agricultural byproducts, so if we are successful, the impact could be quite significant. Obviously, a cleaner, more cost-effective fuel supply would produce tremendous economic and environmental benefits.”

Goldman’s research has contributed to the development of novel catalytic methods for hydrocarbon conversions, which are required to use fossil fuels more efficiently and create sustainable fuel resources. His research has also provided important insights into the fundamental steps underlying hydrocarbon processes, vital to advancing the technology.

Goldman received his Ph.D. from Columbia University and was an IBM Postdoctoral Fellow at the University of Chicago. During his career, he has received many other awards and honors for his research achievements and dedication to science education, including the: Camille and Henry Dreyfus Distinguished New Faculty Award; Union Carbide Innovation Recognition Award; Alfred P. Sloan Fellowship; Camille and Henry Dreyfus Teacher-Scholar Fellowship; Rutgers Board of Trustees Fellowship for Scholarly Excellence; DuPont Aid-to-Education Award; and New Jersey Section of the American Chemical Society Pro Bono Award.

The lectureship is co-sponsored by the ACS Division of Catalysis Science & Technology and the ACS Publications journal ACS Catalysis. The ACS Catalysis Lectureship for the Advancement of Catalytic Science honors current groundbreaking research that enables better understanding of the links among the various subdisciplines of catalysis and also advances the field of catalysis as a whole. The lectureship may be awarded to an individual or a collaborative research team.

The inaugural ACS Catalysis Lectureship for the Advancement of Catalytic Science was presented at the Fall 2012 ACS National Meeting in Philadelphia. A symposium was held in the Goldman’s honor and he received a monetary award.

Goldman lives in Highland Park with his wife, Danuta Szwajkajzer, and their children, Olivia, 20, and Leo, 14.