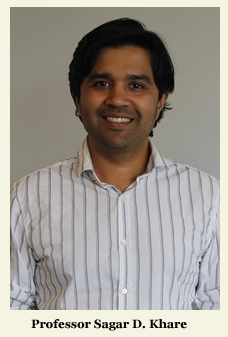 Professor Sagar D. Khare has co-authored a paper to be published in the September 12 edition of the international scientific journal, Nature, which introduces possible antidotes for digoxin poisoning – the method of convicted murderer Charles Cullen, the most prolific serial killer in New Jersey history.

“We designed proteins to bind a drug/steroid called digoxin,” said Khare, a computational biochemist. “This is a commonly used reagent and cardioactive drug, which has a narrow therapeutic window in that it is easy to overdose.”

The paper is titled “Computational Design of Ligand Binding Proteins with High Affinity and Selectivity.” Earlier this year, Khare joined the Rutgers faculty from the University of Washington in Seattle, where this work was performed. The paper is co-authored by Christine E. Tinberg, Jiayi Dou, Jorgen W. Nelson and David Baker of the University of Washington; Rutgers Chemistry Professor Charalampos G. Kalodimos and post-doctoral researcher Wojciech Jankowski; Lindsey Doyle and Barry L. Stoddard of the Fred Hutchinson Cancer Research Center in Seattle; and Alberto Schena and Kai Johnsson of the National Centre of Competence in Research of Chemical Biology in Switzerland. 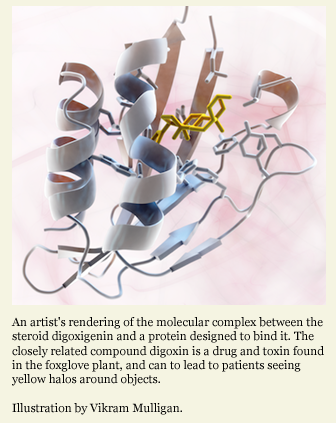 Proteins are molecules that carry out the most important tasks necessary for life such as motion of muscles, digestion of food, and carrying oxygen in blood. Chemically, proteins are polymers of building blocks called amino acids that are strung together like beads on a chain and form specific three-dimensional shapes. The shape of a protein is largely responsible for its unique biological function. Using a computer program called Rosetta developed in Baker’s lab, Khare, Tinberg, and co-workers set about designing unique protein shapes that would recognize digoxin, like designing a lock for a key.

“Think of these proteins as designer molecular sponges that can specifically suck out digoxin from a sample,” Khare said. “What is exciting is that the methods we developed should be quite general, so we’re one step closer to being able to get made-to-order proteins designed on a computer for any given target small molecule. This ability would have numerous applications in biosensing, diagnostics, and therapeutics. Attempts to custom design ligand-binding proteins have met with little success until now.”

Khare and Kalodimos, who direct adjacent laboratories at the newly established Center for Integrative Proteomics Research at Rutgers, are now investigating the mechanism by which the designed proteins capture digoxin.

“The lock-and-key analogy for binding is easy to visualize, but, in reality, molecules are constantly moving and changing shape and that makes molecular recognition far more complex,” Khare said. “It is perhaps like a squishy lock that wraps itself around the key. Knowing the mechanism will help make our design algorithms better.”

Also known as digitalis, digoxin is used to treat abnormal heart rhythms and heart failure. Cullen is serving a life sentence in state prison in Trenton after pleading guilty to murdering 29 patients at hospitals in New Jersey and Pennsylvania through digoxin poisoning. Cullen has admitted that he may have killed many more people, but does not know the exact total, leading many to believe he is the most prolific serial killer in United States history.

Additionally, digoxin poisoning is believed to have affected the work of Vincent van Gogh, the Dutch postimpressionist painter, who died in 1890. Toward the end of his life, van Gogh’s paintings featured halos and the color yellow, which some attribute to the toxic effects of digitalis, suggesting that poisoning dictated the artist’s technique. Digoxin is found in the foxglove plant, a remedy some believe van Gogh received, which can lead to patients seeing yellow halos around objects.

Focusing on the needs of scientists, Nature was founded in 1869 and is a leading international scientific journal.