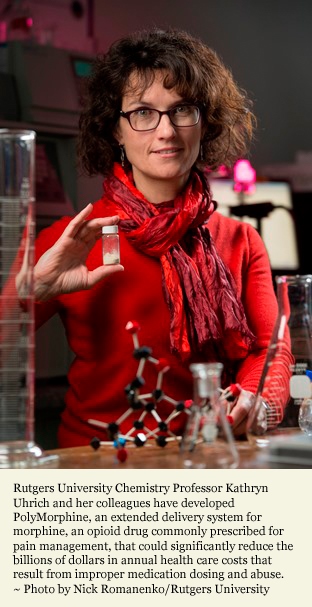 Patent-pending technology developed by Rutgers University Chemistry Professor Kathryn Uhrich and her colleagues has the potential to greatly diminish morphine abuse while significantly improving pain management for patients coping with acute and chronic illness or injury. PolyMorphine (PM), an extended delivery system for morphine, an opioid drug commonly prescribed for pain management, could significantly reduce the billions of dollars in annual health care costs that result from improper medication dosing and abuse.

An internationally renowned polymer scientist, Uhrich and colleagues previously developed a polymerization technology that enables a drug to be its own biodegradable delivery vehicle, which was first utilized in PolyAspirin. PolyMorphine is part of this family of “extended-delivering drugs” that are utilized more efficiently and can be administered at higher concentrations to specific sites in the body utilizing biodegradable poly(anhydride-esters) that turn into therapeutically active molecules.

“Our research has shown that PolyMorphine (PM) extends the duration of the analgesic effect of morphine from less than four hours to three days, almost ten times longer the pain-relieving effect,” said Uhrich, a professor in the Chemistry and Chemical Biology Department (CCB) and Rutgers Dean of Mathematical & Physical Sciences. “The use of PM has the potential to improve patient comfort and quality of life by decreasing dosing frequency and controlling treatment compliance.”

Uhrich’s team conducted in vivo studies using mice to determine the analgesic effect from PolyMorphine, and demonstrated extended analgesia of PM due to its multi-day slow release, when compared to free morphine. In addition, preliminary results demonstrate no signs of morphine tolerance development in the animals. The novel invention has the potential to increase specificity through localized drug release, eliminate requirements for frequent dosing, prevent accidental overdose, and reduce the occurrence of undesired side effects. The study has been published in the Journal of Controlled Release.

“The genius of Dr. Uhrich’s invention lies in the simplicity of the design: take a well-known drug – morphine – and chemically tatter it together, sort of like a string of beads,” said Professor Lei Yu of the Department of Genetics and Center of Alcohol Studies at Rutgers, who collaborated on the study. “This ‘morphine-on-a-string’ now is a pro-drug. Once administered into the body, the hydrolysis processed by the body’s water content gradually releases individual morphine ‘beads’ to achieve long-lasting pain relief. The concept is just brilliant.”

Opioid analgesics such as morphine are among the strongest pain relievers and are widely used for the treatment and management of acute and chronic pain. Currently available commercial extended-release tablets are successful at maintaining long-term benefits only up to 24 hours of morphine.

“PolyMorphine may offer a desirable option as a long-acting, low abuse liability alternative to conventional opioid analgesics because morphine cannot be physically separated from PM,” said Roselin Rosario-Meléndez, a project researcher who recently completed her doctorate at Rutgers. “Other controlled release formulations contain a large dose that can be readily separated by crushing or breaking the tablet or capsule, which results in increased potential for recreational use.”

As a pain management option for abdominal, orthopedic and thoracic surgery patients, The Rutgers Office of Technology Commercialization (OTC) has estimated that PolyMorphine could potentially save approximately $1,000 or more per patient, or $6 billion dollars, based on projections from the more than 6.3 million annual surgeries that fell into these categories in 2010.

“The financial impact of PM could actually be far greater considering that we have an aging population,” said Uhrich. “By 2030, it is expected that first-time total knee replacements will increase 700 percent and first-time total hip replacements will increase more than 150 percent.1 Just as important, but more difficult to calculate are the benefits provided to patients by an improved quality of life, reduced patient concerns about pain relief, reduced physical therapy, lowered immune system stress and the relieved societal costs of drug abuse.”

Another benefit of PM is a likely reduction in morphine abuse. Based on published reports, it is known that opioid drug abuse costs in the U.S. alone tallied approximately $55.7 billion in 2007, including $25.6 billion (46%) in the workplace, $25 billion (45%) in healthcare services, and $5.1 billion (9%) in criminal justice costs. Workplace costs were driven by lost earnings from premature death ($11.2 billion) and reduced compensation or lost employment ($7.9 billion). Health care costs consisted primarily of excess medical and prescription costs ($23.7 billion). Criminal justice costs were largely comprised of correctional facility ($2.3 billion) and police costs ($1.5 billion).2

“Our studies have used PM via injection into the body cavity and we also envision that PolyMorphine can be administered as an implant during surgery or via localized injection,” said Nicholas D. Stebbins, the project’s current primary graduate student researcher. “We plan to continue our research and hope to extend the analgesic effect of PM up to one week.”