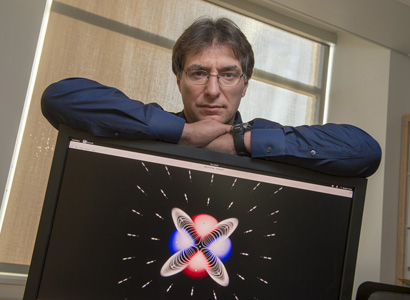 Professor Darrin York is solving a problem that has vexed large universities for years: How do you give personal attention to students in a lecture class with 400 people?

Chemistry professor Darrin York's passion for helping students succeed at general chemistry has earned him recognition as New Jersey Professor of the Year.

York developed a learning system that connects students and instructors to each other online, provides immediate feedback and a more intimate give-and-take than the “recitation” classes that students used to take. This e-learning environment, called “Chemistry Interactive Problem Solving Sessions,” or ChIPS, met with positive reviews from last year’s inaugural class of students.

For this and other ways he has helped students master general chemistry, a subject nearly all science, engineering and health-related majors require, York has been named the 2014 New Jersey Professor of the Year by the Carnegie Foundation for the Advancement of Teaching and the Council for Advancement and Support of Education.

“General chemistry is the first university class that tries to teach students to think like scientists,” York said. “The ability to use one’s own arsenal of tools to solve a problem is something that can’t be taught right out of a textbook. It needs active, experiential learning.”

The award recognizes professors for their outstanding impact on and involvement with undergraduate students and for their scholarly approach to teaching and learning. York joins four other Rutgers faculty members who have earned New Jersey Professor of the Year recognition over the past 25 years: the late history professor Clement Price of Rutgers University-Newark in 1999, math professor Stephen Greenfield in 2004, English literature professor and administrator Barry Qualls in 2006 and marine and coastal sciences professor Scott Glenn in 2010.

John Brennan, chair of the Department of Chemistry and Chemical Biology in the School of Arts and Sciences, admires York’s innovative approaches to teaching and treasures his enthusiasm.

“The amount of thought that Darrin has put into teaching chemical concepts is amazing,” he said. “You have to see the way he analyzes a chemical problem, breaks down what a student needs to know, how to teach it, how to test students, and how to explain whatever they are having trouble with.”

Brennan says the department is embracing York’s innovations in other courses, such as organic chemistry, typically a second-year offering for chemistry and life science majors.

Before Rutgers rolled out ChIPS – developed with support from the School of Arts and Sciences and the National Science Foundation – students would spend an hour each week in recitation classes working on problems and taking quizzes. The online sessions helped resolve scheduling conflicts posed by these classes, but York mainly focused on how to improve learning. In physical recitations with as many as 50 people, some students felt shy about asking questions and admitting they didn’t understand something. Others had trouble grasping concepts, such as the three-dimensional nature of a molecule, that instructors drew on whiteboards.

Most of all, students wanted their quiz results back before the following week’s class, so they could find out what they didn’t understand before they moved on to next week’s material.

The six online sessions each day, five days a week, did more than give students freedom to attend sessions that best fit their ever-changing schedules. It gave them the chance to attend as many sessions as they wanted and to take multiple quizzes, each focused on the same concepts but with different problems. Instructors can use web tools to visualize molecules or animate chemical reactions on screen and write on virtual white boards that students can access after class. After each ChIPS session and quiz, instructors hold virtual office hours to go over additional questions that students may have.

But York isn’t stopping there. He and his collaborators are incorporating artificial intelligence into the system to connect students with each other through innovative academic social networks. When a student has difficulty solving a problem and need guidance, the system will be able to connect that student to others who have mastered the learning objectives associated with that problem. The students can then discuss the problem in a virtual space using tools that support peer-mentoring. This environment will promote online learning in a way that enhances the campus experience and nurtures a culture of collaboration at Rutgers.

“You never fully understand something until you have to teach it,” York said. “This is especially true in science, technology, engineering and mathematics, where concepts are applied to solve complex problems. Students learn a heck of a lot by analyzing each others' problem-solving strategies, critically evaluating mistakes in logic, and teaching one another.”

York joined Rutgers in 2010 as an expert in the field of computer simulations of biomolecules and their reactions. Since then, he has paid equal attention to his research and to improving the quality of undergraduate education, especially in general chemistry. He created the Rutgers chemistry lecture demonstration facility to bring live chemistry demonstrations into classrooms, organized “chemistry breakfast clubs” for students to meet and discuss general chemistry problems, and created a free online summer course for those wanting to prepare for success in college-level general chemistry.

“To me the lines between research and education are infinitely blurred,” York said. “In order for me to be the best educator that I can be, I need to continue to learn and discover things for myself through my research. That excitement of new discovery feeds back into the way I try to educate students.”

The Council for Advancement and Support of Education and the Carnegie Foundation have been offering the U.S. Professors of the Year awards program since 1981. This year, they named a state professor of the year in 31 states.

Media Contact:
Carl Blesch
Rutgers media relations
848-932-0550
This email address is being protected from spambots. You need JavaScript enabled to view it.