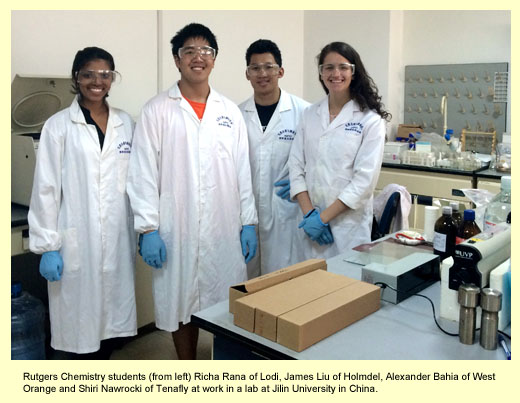 Four Rutgers University Chemistry students recently traveled to Jilin University in Changchun, China as part of an educational exchange program that has seen more than 40 faculty and students traverse the 12 time zones and nearly 6,500 miles between the schools over the last three years. Interestingly, the most memorable experiences of all four students making the most recent trip probably took place off-campus.

“I felt like a celebrity,” said Richa Rana, 21, of Lodi, a senior who hopes to pursue graduate work next Fall. “I felt incredibly welcome. It was as though the entire country wanted to make my stay in China as comfortable as possible. It was also interesting to have strangers come up to me on the street and ask to take pictures with me.”

Shiri Nawrocki, 20, a junior from Tenafly who has been accepted into the Rutgers accelerated seven year B.A./M.D. program, had a similar experience while visiting the Changchun palace of China’s last emperor, Puyi. Changchun is the capital and largest city of Jilin province, located in northeast China.

“Instead of taking pictures of the incredible rooms and artifacts of the palace, people chose to take selfies with me,” Nawrocki said. “I had the pleasure of being treated like a mini-celebrity during my stay. One person even asked me if I was an actress from Hollywood.”

Rutgers Chemistry students James Liu of Holmdel and Alexander Bahia of West Orange also made the trip to Jilin. When not discovering fame on the other side of the world, the Rutgers students participated in a wide range of classes, research and collaborative activities with Chinese students, as well as a summer camp for third year honor students of Jilin University, which has one of the top five ranked chemistry departments in China.

“Jilin University has an especially strong program in inorganic chemistry, and I worked under Dr. Yunling Liu,” said James Liu, 20, a Rutgers junior. “Dr. Liu’s work focuses on creating crystalline materials made of metals and organic compounds for gas storage and separation. The crystals have high surface area to volume ratios and have the potential to facilitate the transportation of gases and the separation of carbon dioxide from the atmosphere. I synthesized crystals of different metals, including copper and indium.”

Bahia enjoyed the opportunity to work with Chinese students at the summer camp, which was designed to help the Jilin students improve their English by creating, directing, and starring in a movie.

“The one memory that sticks out was helping with the summer camp and traveling to Harbin with the students,” said Bahia, 20, a Rutgers senior. “They were so kind and thoughtful during the trip. They really make you feel welcome. The whole week leading up to the closing ceremony for the summer camp was very memorable. We helped the students create a movie in English. I have the utmost respect for those students being able to speak both Chinese and English. The memories we made in China will be with me for the rest of my life.”

“We are extremely pleased that our students can take part in this special exchange program with Jilin,” said Rutgers Chemistry Chair and Professor John Brennan. “The collaborative relationship with Jilin provides students at both universities with opportunities to experience different cultures and educational and research practices. We look forward to continued educational exchanges with Jilin.”