"It was tough to do at home. I was always on the lookout at hardware stores for chemicals I could use to make colored fire or other tricks to show to my friends." 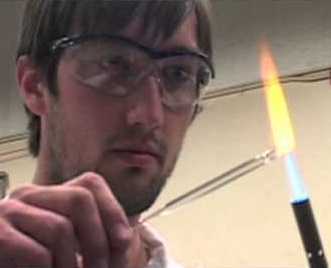 "It was tough to do at home. I was always on the lookout at hardware stores for chemicals I could use to make colored fire or other tricks to show to my friends."

These early experiences ignited his interest in problem solving and showmanship that powers both his research and teaching assignments at Rutgers. The only difference is, now, he possesses the tools, resources, and dedicated students to carry out his work.

Lipke grew up in Buffalo, NY where he studied chemistry at Case Western Reserve University. He moved to the west coast two weeks after completing his undergraduate degree to pursue a Ph.D. at the University of California, Berkeley. At Berkeley, he received world-class training in the study of reactive transition metal catalysts and main-group compounds while investigating novel electrophilic catalysts for hydrosilation reactions.

Seeking to expand his chemical horizons, Lipke moved on to study supramolecular chemistry and molecular machines as a postdoctoral fellow at Northwestern University. His advisor, Sir Fraser Stoddart, won the 2016 Nobel Prize in Chemistry.

Lipke accepted a faculty position at Rutgers and began setting up his lab in 2017. He is currently applying his multidisciplinary background to the study of catalysts for the sustainable production of fuels and other valuable chemical products. Lipke's current research focuses on addressing chemical challenges faced in energy science. His team specializes in improving the energy efficiency of converting electricity into chemical fuels, potentially making solar/wind power storable and transportable.

"We['re] mak[ing] useful things out of stuff that is less useful."

Lipke admits that research is not the only reason he ended up at Rutgers. He also loves to teach. Whether elementary school children or graduate students, he loves to help other chemists grow.

In his spare time, Mark is quite creative. He creates art through various mediums, such as painting with pastels and drawing with colored pencils. He has even developed a unique style of light box artwork that combines painting with LED lights. These pieces have the nuanced texture of an oil painting but glow with an intensity that captures the modern world.