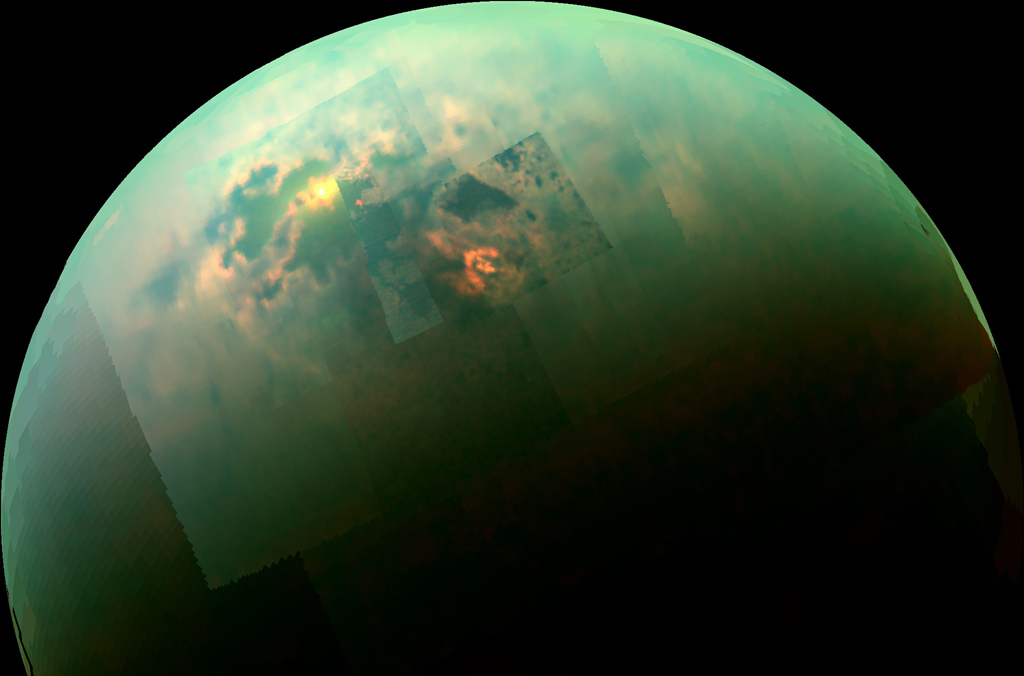 The Remsing Group's proposal, for their work on understanding molecular driving forces for the chemistry of weird life on Titan, was selected for funding by NASA's Exobiology program. 159 proposals were received, but only 17 were selected for funding.

NASA's Exobiology program seeks to understand the "origin, evolution, distribution, and future of life in the Universe." It funds research that approaches questions of the evolution of life, life's potential to adapt to new environments, and life elsewhere. NASA’s ongoing mission is to explore space for the benefit of life on Earth.

The Remsing Group participates in the NASA Postdoc Program as one of the Prebiotic Evolution opportunities! The deadlines are March 1 and November 1. Read the group's selected abstract below:

“Biochemistry on Earth requires water as its solvent. However, many chemical processes occur more easily in organic liquids, and it has been hypothesized that such solvents will facilitate the emergence of non-aqueous or weird life. The Saturnian moon Titan is an ideal candidate for weird life. The Cassini-Huygens mission identified lakes of liquid hydrocarbons (methane/ethane) at low, cryogenic on Titan's surface, in which weird life, or weird prebiotic chemistry, may have evolved. Still, we have little idea where to find such hydrocarbon-based life, ultimately because we do not know how it might function. To understand how weird life may function, we will take cues from life on Earth, namely that fundamental chemical processes like electron and proton transfer reactions underlie terrestrial biochemistries. Moreover, a prevailing theory in terrestrial prebiotic evolution is that mineral interfaces catalyzed essential chemical reactions in a manner similar to biological enzymes. It is natural to assume that non-aqueous life evolved in a similar manner by exploiting the unique chemistry at interfaces, suggesting that one should look for weird life in areas with high concentrations of relevant minerals. But, these relevant minerals must still be identified based on their ability to catalyze the chemistry of weird life. Therefore, finding weird life, or prebiotic chemistry that may lead to weird life, ultimately begins with understanding the fundamental processes that may underlie its biochemistry. However, a foundational understanding of physicochemical processes at Titan conditions is currently lacking. To build such a foundation, we will use molecular theory and computer simulations to uncover the molecular driving forces for fundamental prebiotic chemistry and biochemistry in liquid hydrocarbon solvents and at their interfaces with organic minerals.

We hypothesize that biochemistries evolved in cryogenic, nonpolar liquids require the same fundamental processes as on Earth, but with inverted polarities and a significantly greater role of quantum effects. Biological systems on Earth seemingly exploit the quantum nature of electrons and nuclei when possible, for example, to tune reactivity. Quantum effects become increasingly important as temperature is lowered, and we expect the low temperatures on Titan to enable weird life to functionally employ quantum effects more efficiently than Earth-life. Moreover, the low surface temperature on Titan will result in minerals largely composed of organic crystals held together by weak hydrogen bonds and van der Waals interactions, different than those on Earth that are stabilized by strong covalent and ionic bonds. We will use molecular simulations to investigate fundamental processes in hydrocarbon mixtures and their interfaces with organic minerals at Titan-like conditions, including electron, proton, and energy transfer. We will additionally connect our results to experiments by predicting reaction kinetics and spectroscopic signatures, which can be measured in laboratory simulations of Titan s chemistry and will aid in identifying surface organics found by planned Titan landers.

The ultimate goal of this work is to identify environments on Titan that are conducive to biochemical processes to aid in the search for non-aqueous life on Titan and other worlds. This work is responsive to the Prebiotic Evolution heading of the Exobiology (C.5) solicitation, which seeks proposals to understand processes that govern the prebiotic evolution of materials necessary for life. This goal also addresses aspects of the Astrobiology Roadmap that seek to determine how life may arise in solvents other than water and how one might identify corresponding bio-signatures. Our end product will be a molecular-scale foundation for understanding fundamental biochemical processes in cryogenic, non-aqueous liquids that will help guide the search for weird life and prebiotic chemistry in the universe."