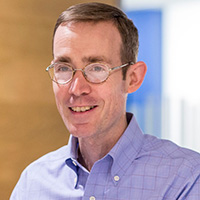 Prior to his role with Janssen, Percy was Senior Vice President and Head of Discovery for Bristol-Myers Squibb (BMS). Prior to that, he was Senior Vice President and Head of Discovery Chemistry & Molecular Technologies and was also Site Lead for the Biocon-BMS R&D Center in Bangalore, India. Percy began his career as a Senior Research Scientist in Chemical and Physical Sciences at DuPont Pharmaceuticals (1999 – 2001) and joined BMS when the company acquired DuPont in 2001. During his combined time at BMS and DuPont, he collaborated with a wide range of colleagues to help build the immunoscience pipeline. In 2013, after moving into a cross-therapeutic area role, Percy worked on advancing the portfolio and driving innovation in supporting technologies, non-traditional modalities, and novel external partnerships.

Percy is the inventor or co-inventor on more than 25 U.S. patents and has authored or co-authored more than 75 peer-reviewed research publications.

He received his bachelor’s degree in Organic Chemistry from Dartmouth College, his Ph.D. in Chemistry & Chemical Biology from Harvard University, and completed a post-doctoral fellowship at Harvard Medical School and Massachusetts General Hospital. In 2014, he received his M.B.A. from the Massachusetts Institute of Technology.