Solar fuels have enormous potential to furnish carbon-neutral energy to satisfy the expected doubling of global energy requirements over the next 50 years.  They can potentially provide near-term liquid fuels that can enable nations to take full economic advantage of existing infrastructure, while delivering a clear path toward new fuels for the future.  The major challenge lies in the fact that the science and engineering necessary to establish a viable solar fuels industry remains at best undeveloped and at worst non-existent. The overarching goal of current research directions is the development of efficient, cost-effective photovoltaic and photocatalytic systems to capture sunlight that are integrated with high performance catalysts for water splitting and reduction of CO2 to liquid fuels. The development of these technologies requires solving major technical, systems, and economic challenges. 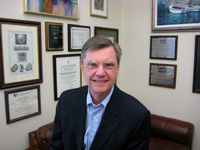 Prof. Michael R. Wasielewski received his Bachelor of Science (1971) and Ph.D. (1975) degrees from the University of Chicago. Following his graduate work, he was a postdoctoral fellow at Columbia University. He then moved to the Argonne National Laboratory, where he rose through the ranks to become Senior Scientist and Group Leader of the Molecular Photonics Group.  In 1994, he joined the faculty of Northwestern University, where he is currently the Clare Hamilton Hall Professor of Chemistry. He served as Chair of the Chemistry Department at Northwestern from 2001-2004. He is also the Director of the Argonne-Northwestern Solar Energy Research (ANSER) Center, and holds an appointment as Senior Scientist in the Center for Nanoscale Materials at Argonne.  Prof. Wasielewski's research centers on light-driven charge transfer and transport in molecules and materials, photosynthesis, nanoscale materials for solar energy conversion, spin dynamics of multi-spin molecules, molecular materials for optoelectronics and spintronics, and time-resolved optical and electron paramagnetic resonance spectroscopy. His research has resulted in over 375 publications. Prof. Wasielewski was elected a Fellow of the American Association for the Advancement of Science in 1995, and has held numerous distinguished lectureships and fellowships. Among Prof. Wasielewski’s recent awards are the 2008 Porter Medal for Photochemistry, the 2006 James Flack Norris Award in Physical Organic Chemistry of the American Chemical Society, and the 2004 Photochemistry Research Award of the Inter-American Photochemical Society.