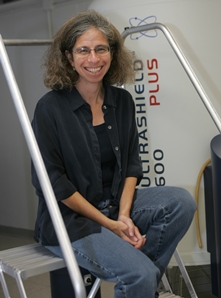 Collagen is the most abundant protein of the human body. It provides structural integrity in the human body and is responsible for multiple interactions with cells and other matrix molecules. Many common diseases, such as arthritis, diabetes, and cancer involve abnormal regulation or reactivity of collagen, and certain genetic diseases that arise from collagen mutations result in connective tissue disease or aortic aneurism. Although the collagen triple helix has a relatively uniform rod-like structure, with an amino acid sequence of (Gly-X-Y)n repeats, subtle alterations in structure and dynamics along the collagen chain are critical to many biological events. It is outstanding how proteins can recognize specific sites in collagen and how a simple Gly mutation on collagen sequence can lead to severe diseases. Our laboratory uses an integrated approach based on NMR in conjunction with computational, biophysical and biological methods to provide unique structural and dynamic insight into protein recognition of collagen and to understand the molecular basis of collagen diseases arising from mutations.

The binding of integrins to collagen plays a critical role in numerous cellular adhesion processes including platelet activation and aggregation, a key process in clot formation, and cancer metastasis. The two major integrin receptors, α1β1 and α2β1, bind collagen through their α1 and α2 I-domain. The binding is specific with variable affinities, depending on the collagen sequence as well as the integrin protein. Our research focuses on addressing the following questions:

The substitution of a single Gly by another amino acid breaks the characteristic repeating (Gly-X-Y)n sequence pattern of collagen and results in connective tissue disease. Osteogenesis Imperfecta (OI) is characterized by brittle bones and results in lethal to non-lethal phenotypes. Our goal is to characterize the structure and dynamics of Gly -> X substitutions that result in OI disease and to be able to predict OI phenotype based on sequence analysis using an integrative approach that includes NMR, bioinformatics, MD simulations and stability measurements. To achieve this, we base our research in the following:

Many devastating neurodegenerative diseases are associated with the transformation of protein from their normal soluble forms to amyloid fibrils. Upon amyloidogenesis these proteins accumulate in the brain and cause diseases such as Parkinson's, Alzheimer's, type II diabetes, and Huntington's disease. α-synuclein is a “natively unfolded” 14kD protein of unknown function that has been implicated in Parkinson's disease pathogenesis. Numerous studies have established the in vitro conversion of unfolded α-synuclein to a filamentous β-sheet aggregate. Despite exhaustive research efforts, the mechanism by which α-synuclein transforms, from a soluble unfolded protein to an insoluble aggregate, remain unclear. There is increasing evidence that small protein oligomers may be more toxic than the final fibrillar aggregates. Therefore it is critically important to characterize the species formed during the very early stages of aggregation. Our laboratory uses several techniques like NMR, fluorescence, electron microscopy, circular dichroism and computational methods to try to elucidate the initial stages of the α-synuclein aggregation mechanism.

We are characterizing the acetylated α-synuclein and comparing it to the non-acetylated form to try to elucidate the real aggregation mechanism that occurs in vivo.

Kang, L., M.K. Janowska, G.M. Moriarty, and J. Baum. “Mechanistic insight into the relationship between N-terminal acetylation of α-synuclein and fibril formation rates by NMR and fluorescence”, PLoS One, 8(9), e75018 (2013).