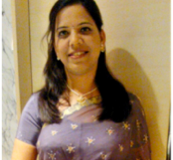 Ritu Ahuja joined the group as a post doc in June 2005 after obtaining a Ph.D. degree in chemistry from Indian Institute of Science, Bangalore, India. While at Rutgers, she worked in the area of alkane metathesis and alkane aromatization. She left the group in June 2007 and joined Prof. Wolfgang A. Herrmann in Technical University Munich Germany as a post doc where she worked in the area of silsesquioxanes and spherosilicates. After one year, she returned to India and worked with DOW Chemicals, Pune for about three years in the area of high throughput research for olefin polymerization. Then moved to Reliance Industries, an Indian Petrochemical company for a year in the city of Vadodara, Gujarat where her research was mainly focused on value addition of by-product olefinic streams. In July 2012, she moved to Solvay Specialty Polymers in the same city as a program manager for fluoro-polymers. Her current research group is involved in synthesis of F-macromers/additives, their incorporation into polymers, characterization and applicative tests.