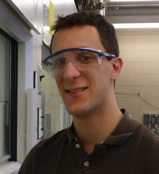 Michael was born and raised in the San Francisco Bay Area. He did his undergraduate studies at nearby UC Davis, and received his B.S. in 2007. After graduation, he did some catalysis research in the private sector before starting graduate school in the fall of 2010. His research focuses on the selectivity of alkane dehydrogenation.