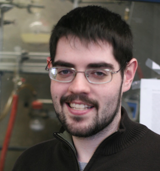 Jason was born and raised in Middletown, NJ. He received a B.S. in chemistry from Monmouth University in 2007, followed by a Master’s degree in Organic Chemistry from Columbia University the next year. In Summer 2008, Jason joined the Goldman group to pursue his diverse research interests, which include synthetic organometallic chemistry, catalysis, and next generation energy solutions.