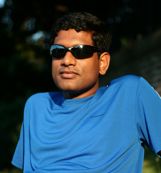 Sabuj received his M.S. in Organic Chemistry from IIT in Bombay, India in 2004. He recieved his PhD in 2010 for his work in the synthesis of catalysts for C-H activation and mechanistic studies in the area of heterogeneous catalysis. Sabuj was also the recipient for the Damle award for excellence in research for the 2006-2007 calendar year. Sabuj is currently a post-doctoral researcher at the University of North Carolina with Maurice Brookhart.