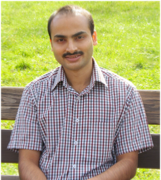 Akshai was born in 1981 and he obtained a Bachelors degree in 2002 and in 2004 his Masters Degree in inorganic Chemistry both from Mangalore University. In July 2009, he was awarded a PhD Degree for his work on “Reductive and Metathetic Coupling Reactions Mediated by Group(IV) Metal Alkoxides” under the supervision of Prof. Ashoka G. Samuelson from Indian Institute of Science, Bangalore. He continued his post doctoral studies in the same lab and worked on “Experimental and Computational Studies to Elucidate Unusual Titanium Mediated Reductive Pathways”. In October 2010, he moved to the group of Prof. Andreas Terfort, Goethe University, Frankfurt where he worked on a project entitled “Synthesis and Nucleophilic Substitution of Polyfluorinated Annelated Arenes as Materials for Optoelectronic and OFET Devices”. In June 2012, Akshai joined the Goldman group. Here his research interests include pincer based iridium catalysts for alkane dehydrogenation and synthesis of fuel chemicals via alkane coupling reactions. He is currently a professor at the Indian Institute of Technology - Guwahati in India.