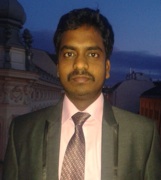 Sathiyamoorthy Murugesan was born in Kadukkathurai, Tiruchirappalli, in Tamilnadu, India in 1988. He started M.Sc. in St. Joseph’s College (affiliated to Bharathidasan University), Tiruchirappalli. In 2009, he did a two-months internship at Bhaba Atomic Research Centre (BARC) with an Indian Academy of Sciences fellowship. In 2010 he carried out an additional master’s within the program “Catalysis, Molecules, and Green Chemistry” at the University of Rennes 1 in France, in the group of Profs Christian Bruneau and Pierre H. Dixneuf. In 2012 he was project assistant with Prof. Sambasivarao Kotha at the Indian Institute of Technology, Bombay, India. In February 2016, he was awarded his PhD degree in synthesis and reactivity of Nickel, Cobalt and Molybdenum PCP pincer complexes at the Vienna University of Technology, funded by the Austrian Science Fund (FWF), under the supervision of Prof. Karl Kirchner. In May 2016, he joined as a post-doctoral studies in the group of Prof. Alan Goldman group, funded by CENTC- Center for Enabling New Technologies through Catalysis. His research interests on "Synthesis of Osmium and Iridium hydride based complexes and their unique useful application of alkane dehydrogenation". He is currently a postdoctoral researcher at KAUST Catalysis Centre.