Examples of our research in popular media: 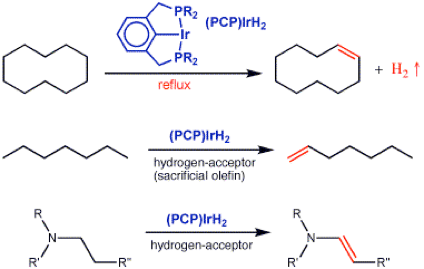 Alkane Metathesis and other Tandem Systems for Catalytic Hydrocarbon Transformations 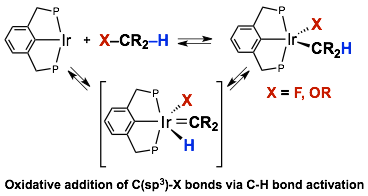 In another surprising reaction we have found that C-H addition of an aromatic (tropone) results in nucleophilic activity at a remote site on that molecule.

Oxidative addition of C-H bonds has been assumed to have great potential for the purpose of catalyzing functionalization in which there is an overall cleavage of the C-H bond. The discovery of these reactions highlights the possible applicability of C-H bond addition toward functionalization of various substrates, not necessarily at the site of the C-H bond cleavage.

A new target of our research is the “hydrocarbylation” of olefins. Like dehydrogenation, this reaction has an unlimited number of potential applications ranging from natural gas liquefaction and petrochemical conversion to complex organic syntheses. 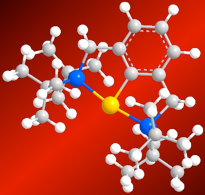 In addition to experimental approaches, ab initio molecular orbital calculations are conducted in collaboration with Prof. Karsten Krogh-Jespersen. This work has yielded new perspectives on the most fundamental aspects of organometallic chemistry such as the nature of the metal-CO bond or the process of C-H addition. We now believe that the power of computational chemistry has reached the point where the modification or even the de novo design of catalysts using MO calculations is entirely feasible; efforts in this direction are currently underway.